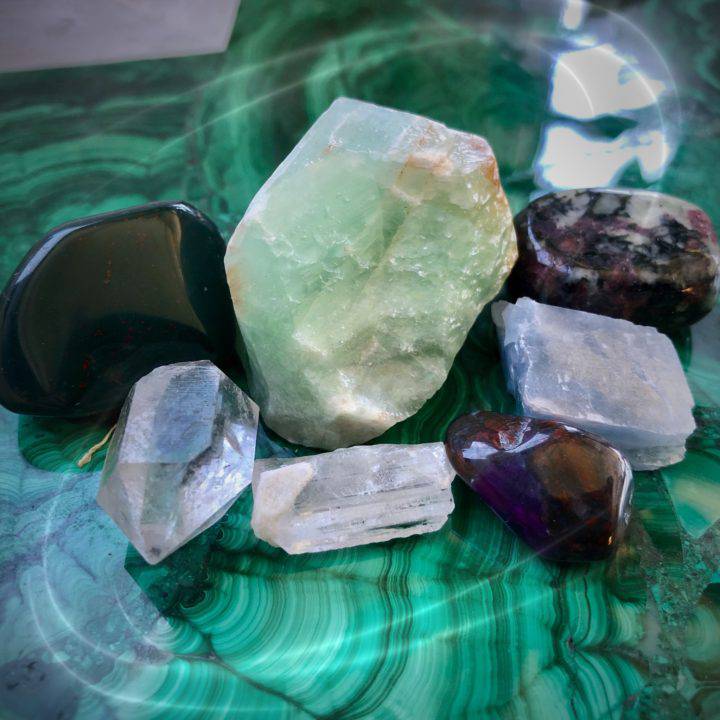 There are several narratives that describe my life, but never thought
that chronic illness would be one of the stories that would play out in
mine, but it did, and I have spent the last few years in pursuit of complete health.

6 years ago I was diagnosed with lupus.  I can still remember the day that it was handed to me, and the words that my doctor uttered after confirming the diagnosis: “There is no cure.”

Well, the idea that there could not be a cure did not go over well with me. I did not believe that and believe that choosing to release that statement from my life led me onto the path to complete wellness.

Herbs, essential oils and nutrition played an integral role in my healing, but another aspect that I don’t talk about much, but are an important part of my treatment protocol, are crystals.

There will be a lot more detail about that coming in my Roadmap to Multi-Dimensional Wellness online course.

That is why I am so excited about this autoimmune support gem/crystal set.

This autoimmune support gem set is very special to me. It was designed it
to support your autoimmune health and healing. As an empath, I have to manage the effects of a wide range of autoimmune
conditions. And in my research and practice, I have discovered that
these stones are very beneficial allies in my homeopathic
toolkit.

The magic of this autoimmune support gem set

Sugilite is found in small pockets around the world
and is prized for its many healing properties. It reduces inflammation
in the body, heals the central nervous system, protects the healer
during healing work and ritual, grounds, soothes, and NEVER needs to be
charged. It helps with brain chemistry, focus, migraines, and some even
say it helps people with autistic spectrum disorders.

Eudialyte, a very rare healing stone for the central
nervous system. Eudialyte brings all systems into their balanced state
and transforms your physical ecology. This stone is especially powerful
for autoimmune disease.

Danburite purifies the auric body of low or stagnant
energies – anything that doesn’t align with your highest good. Its high
vibration revitalizes the body, mind, and spirit. It can be used in
body scanning, a process in which you scan your body to sense areas of
illness and imbalance.

Bloodstone is a stone of healing and rejuvenation,
helping to heal injuries, improve circulation, and temper pain or
discomfort from various ailments. It also brings mental and emotional
peace.

Tibetan Quartz is The Master healer and it allows
the bearer to bring healing to himself or another, clearing especially
the lower chakras of trauma and energetic residue.

May they bless you with the profound healing that you seek.

This listing is for one (1) autoimmune support gemstone set. Yours
will arrive lovingly parceled along with one white sage leaf you can use
to clear energies.

Related Topics:
Up Next

25. Is Free Will an Illusion? | Crystal Ki Healing

A blog on crystals, healing, personal and spiritual development and all matters energetic.

Discover ancient fossils, sedimentary chert, or just regular old pretty stones. Vancouver Island’s volcanic origin and the ancient uplifting of tectonic plates promises the energetic hounder a constant supply of interesting treasures and precious finds. Combine rockhounding with casual strolls along the beach or strenuous hikes in search of exposed mineral veins – either way, you’re in for a memorable outing amid magnificent scenery! 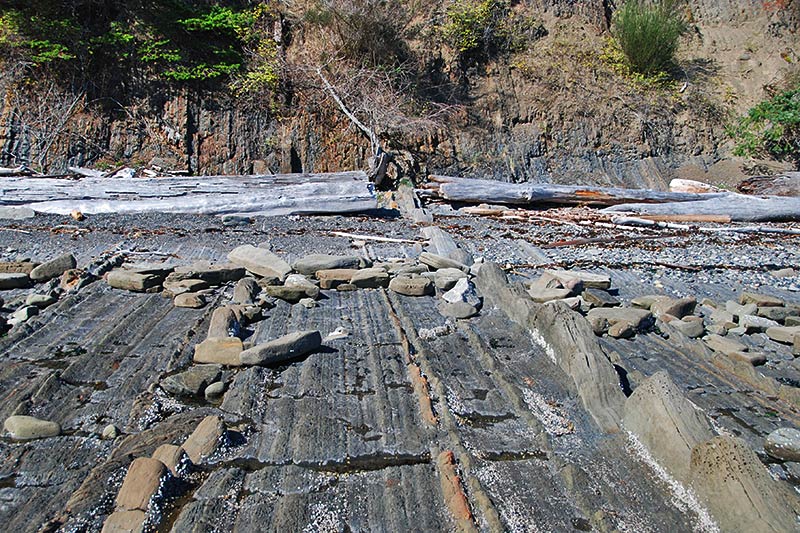 The abundance and accessibility of beaches on Vancouver Island makes it a ‘gold mine’ for the rockhound. Most beaches are public with good access, and full of treasure at low tide. The glacial origin of the Island is responsible for large deposits of debris full of rocks, with the fascinating geology visible everywhere here and in the Gulf Islands. Ferocious winter storms constantly churn up the coastline, offering renewed bounty to the rock enthusiast.

Even the cobble beaches within Victoria can provide areas of interest to the rockhound. Dallasite, named after Dallas Road, is a volcanic rock found on almost any beach, and is not restricted to the Island. Just outside Victoria on the way to Swartz Bay is Island View beach, the site of several palaeontological finds and a good area for rocks and fossils. Large pieces of the sedimentary cliffs that overhang the beach often crumble to the ground below, revealing precious fossils and rock specimens.

West of the city, between Sooke and Jordan River, miles of rockhounding terrain include Whiffen Spit, Sooke Bay, Otter Point and Gordon Beach. Each of these areas has its own unique beauty, geography and rock finds.

Driving north up the Island will bring you to the Cowichan Lake region, including the ridge around Lake Cowichan and the community of Youbou, known for their supplies of rhodonite. At Nanaimo there is Petroglyph Provincial Park and the Horne Lake area (Horne Lake Caves Provincial Park), which is rich in dallasite. The beaches at Parksville and Qualicum Beach are wonderful for rockhounding, beachcombing and swimming.

Englishman River Falls Provincial Park has a spectacular series of waterfalls and pools with unusual geological formations and interesting rocks and boulders. The area has been made into a provincial park and campground, and it is an easy day trip from Victoria. To get there, drive west out of Parksville for ten minutes on well-marked roads.

Many of the Gulf Islands are home to interesting geology, and provide good areas for rock hounding, particularly Saltspring Island, Saturna Island and Hornby Island.

Wherever you travel on Vancouver Island, it is possible to discover interesting geological specimens. The experienced rockhound will not find it difficult to search through the overgrowth and vegetation of inland areas, while the novice may want to stick to the beach. Either way, the trails, roads and paths that crisscross the Island make it possible to have a rewarding rockhounding experience.

Being A Soft Place To Land

One of my podcast guests Lisa Tahir shared this healing nugget during our conversation: “Let go of the judgements you hold against yourself and find that empathy and forgiveness for you. And you’ll be able to do it easily for others and be a softer place to land for them.” It has been ringing in my ears ever since: ‘being a soft place to land’ for yourself and others. It is who and what I want to be as I grow up.

Another Healer had told me once ‘Damla as you begin to resolve your inner conflicts, others will find it easier to approach you because it won’t feel like they are coming near a war zone’. Being a war zone versus a soft place to land, in my experience that is the difference between tending to your needs, taking action to heal your energetic wounds, practicing forgiveness, love, directing your gaze to goodness every single day versus not doing anything about your wounds, your needs, and your well-being.

How can I be a soft place to land for myself and others? How can I treat the life that is here and now with more compassion, forgiveness, and listening instead of getting lost in my own and the world’s trauma and drama? I am asking these questions to give myself a chance to choose between being a war zone and a soft place to land.

With lots of love and light,

All about healing and more 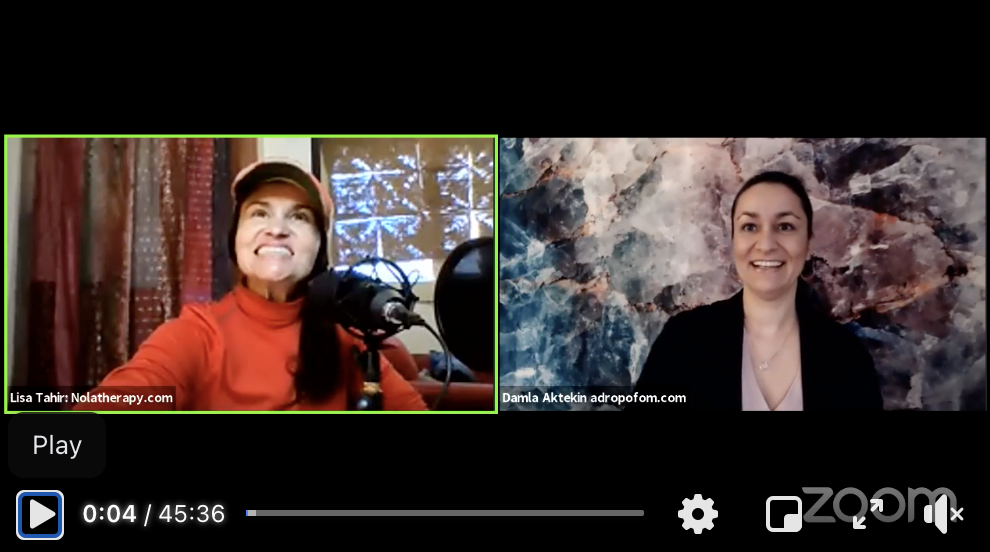 I had so much fun chatting with Lisa Tahir for LA Talk Radio. We talked about all things healing and more.